A bald eagle soared high above Lemon Bay, searching for fish, as its powerful seven-foot wings beat the air. Bald eagles bring me hope. In half a century, after banning DDT, and passing the Endangered Species Act, populations of eagles have increased 10-fold. Florida now has over 1,400 bald eagle nesting territories, the largest number in the lower 48 states. Only Alaska has more eagles.

Eagle Mates: Eagles mate for life, but if a mate dies, they often seek another. Each year, eagles court anew using a magnificent sky dance. Although similar in appearance, females are 10-20% larger than males. Their territory is a 1-2 mile range located near water since fish is their primary food source. 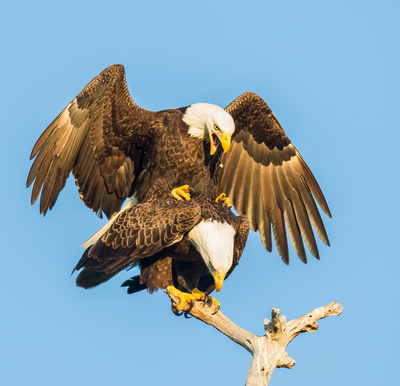 Life in the Aerie: Eagles generally build their nest (aerie) in a strong tall pine tree, near a snag, which they use as a viewing post.  Unless disturbed, they rebuild their nest yearly. Aeries can weigh up to two tons and reach a diameter of 7 feet. 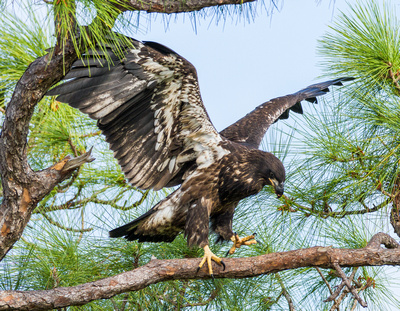 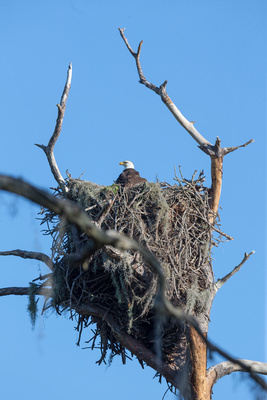 Both mates share incubation duties. In Florida, 1-3 eaglets hatch in late December or early January. Initially the male fishes, and the mother tears the fish into tiny morsels for her babies to swallow. Eagles bring 2-4 fish per day to their chicks. At 8 weeks, young eaglets test their wings, and between 10-13 weeks of age, they fledge.  If an eaglet is reluctant to leave the nest, the parents seem to encourage their young to fledge by flying around the nest carrying fish to a nearby tree. Juveniles follow their parents for months, until they learn to fish. If a second-year immature eagle returns to the nest, the parents will chase it away. Immature Bald eagles explore vast territories and can fly hundreds of miles per day, traveling 30-35 mph at altitudes up to 10,000 feet. Eagles live between 15-30 years in the wild. 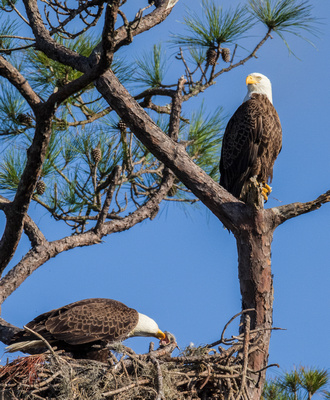 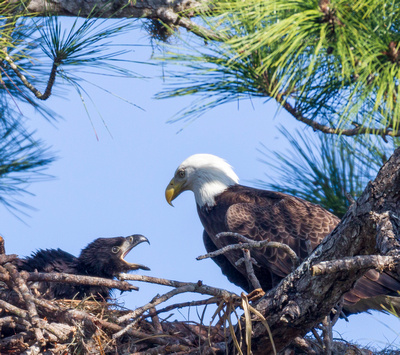 Feathers, Beaks, and Talons: Bald used to mean white, rather than hairless. Eagles are brown at birth. Their eyes and beaks turn yellow gradually over the first four years, and at age five, their head and tail feathers turn white. Their beaks are weapons: the hooked upper mandible overlaps with the bottom and is sharp enough to slice skin, but delicate enough to feed its chicks. The beak and strong talons, made of keratin, grow continuously. 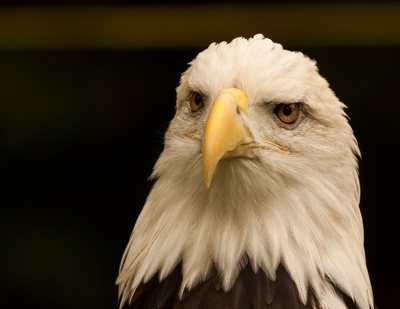 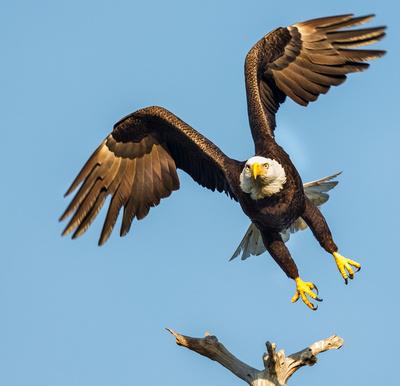 Symbolism: These majestic birds symbolize freedom, independence and strength. In 1782, our founding leaders chose the largest raptor in North America as our national emblem for they admired this regal bird native solely to North America. For Native Americans, Bald eagles signify honor, leadership and bravery. 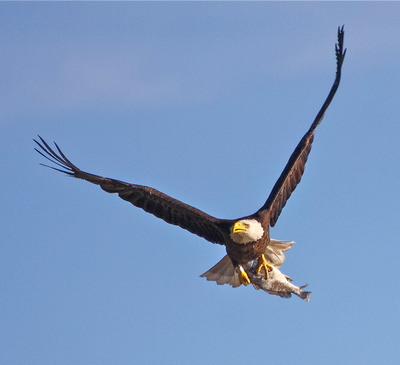 People continue to use eagles for inspiration. For example, a popular, wildly inaccurate PowerPoint presentation on the Internet claims that some eagles choose at age 40 to extend their lives to age 70 by removing their beaks, talons and feathers. This modern myth encourages people to shed their past to move forward. The conservation of the bald eagle reminds us that we can save endangered species. 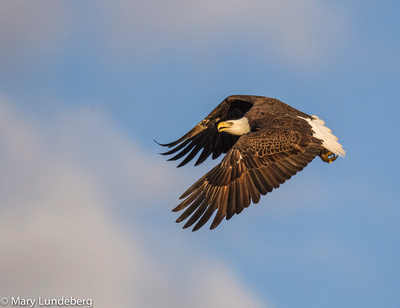