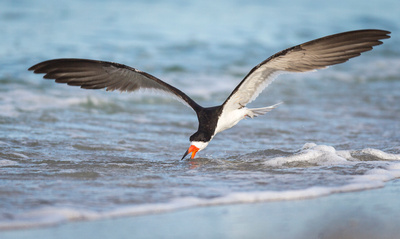 Black Skimmers (Rynchops niger) are one of Florida’s more unique birds. Although related to terns, the skimmer doesn’t dive for fish. Instead, this awesome bird uses its brilliant orange-red bill to knife through the surf for fish as it glides expertly over water. Their long, broad wings beat mostly above the body, enabling graceful, buoyant flight just inches above the water. 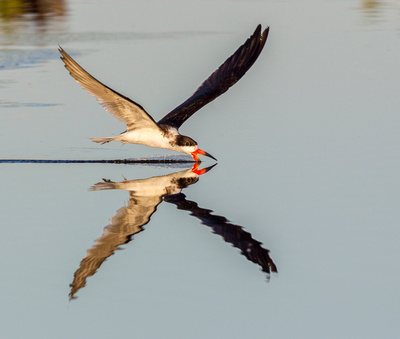 The lower mandible of the skimmer’s thin bill is longer than the upper. Black skimmers skim water with the lower mandible, then snap its upper mandible down when it touches a fish. Sometimes the skimmer flips its head back to swallow the fish as it continues flying. Even the tongue is orange! Male’s bills are slightly larger and deeper than female’s. This odd, but useful bill sets skimmers apart from all other American birds. When skimmers hatch, the two mandibles of their bills are equal in length, but when they fledge, the lower mandible is about one centimeter longer than the upper. 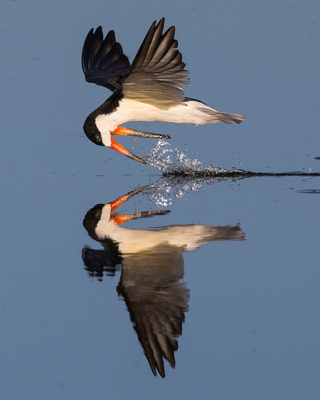 Because it feeds by touch, the skimmer doesn’t need daylight like most birds to forage. Skimmers primarily fish at dawn and dusk, and sometimes at night, when the water is calmer and fish are closer to the surface. Skimmers capture small fish up to five inches in length. 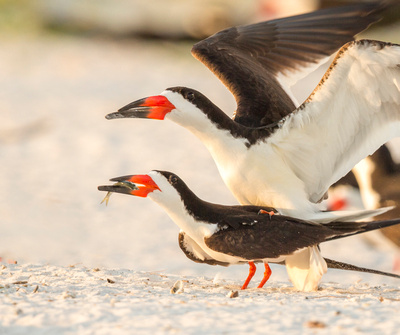 Skimmers are the only bird species to have slit-shaped pupils, like cats do. This vertical slit enables them to see in low light, and cuts the glare of water and white sand in bright light. 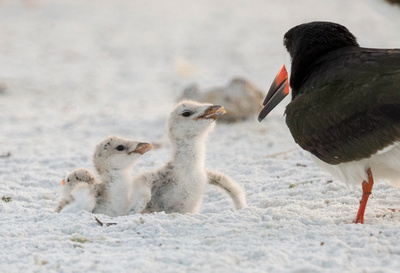 Males and females share parenting duties. Their nest is a scrape in the sand, about one inch deep and ten inches in diameter. Males do more scraping than females, kicking sand behind them with their orange feet. The average nest contains four spotted buff eggs which blend into the sand. Both parents incubate the eggs for 21-25 days. The downy chicks are vulnerable to heat and predators, so parents shade and guard them. Within a couple of days, the chicks are running around, and fledge at three-four weeks. Both parents continue to feed their young for several weeks after hatching, while the chicks practice skimming along the shoreline. 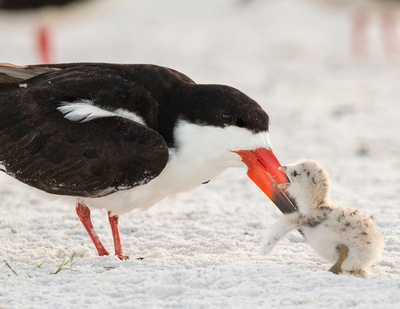 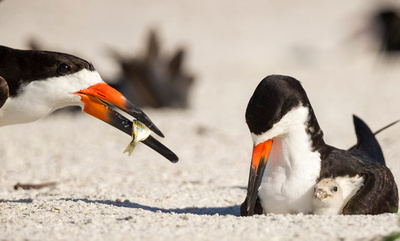 Skimmers breed in colonies, sometimes quite large, containing hundreds of birds. They prefer sandy beaches, and nest along the Atlantic and Gulf coasts. 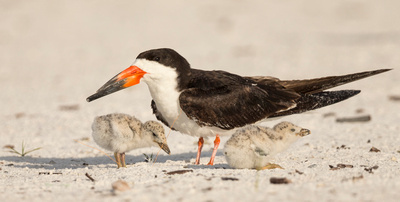 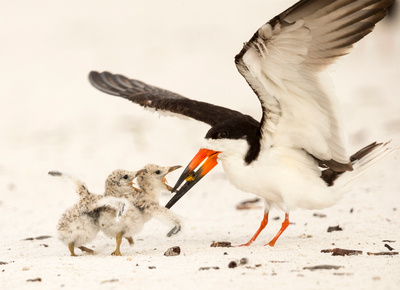 Coastal development has reduced the territory available for nesting. Black skimmers can be disturbed by beachgoers, dogs and gulls. For these reasons, the Florida Audubon created a bird steward program to educate people about beach-nesting birds and to protect the fragile eggs and chicks. 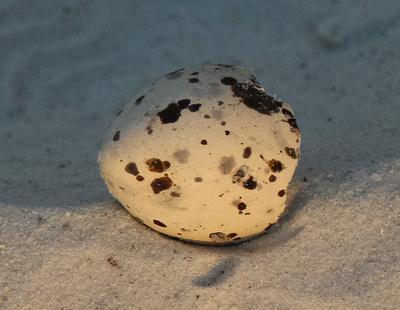 Coastal storms can wipe out nesting birds, and although tropical Storm Colin destroyed eggs and 25 of 40 chicks on Lido Key, many birds that nested on higher ground survived. After the storm, these exotic creatures mated again.

You can help skimmers survive while enjoying their acrobatic flight and barking song by keeping kites, dogs and fireworks far away from nesting colonies. 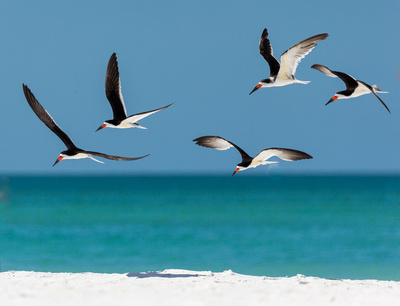