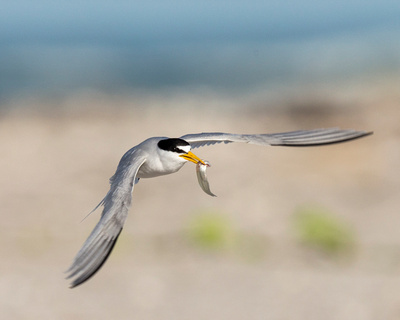 One of the joys of living in Florida full-time is noticing least terns return each spring to find nesting territory. After a delightful display of courtship behavior and protective parenting, these tiny terns migrate to South American in mid-October. Although small, their presence is both seen and heard.

Calls of terns create a concert of music, as males hover above the water, dive to capture prey, then pursue potential mates while carrying a minnow in their bright yellow bills. The handsome least tern has a charming courtship ritual, in which the male offers a minnow to a female, and bows his head from side to side as he puffs his chest and dances around her. If interested, she crouches down, and accepts his gift. After bonding, she typically lays three eggs in a shallow scrape of sand and shells. 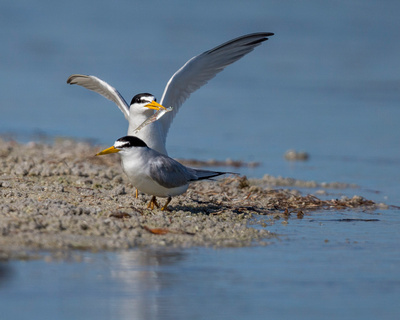 Least tern eggs blend in with the sand. After three weeks or so, the camouflaged chicks hatch. For their first three days, the chicks stay near the nest, cuddled together in a tiny depression in the sand. 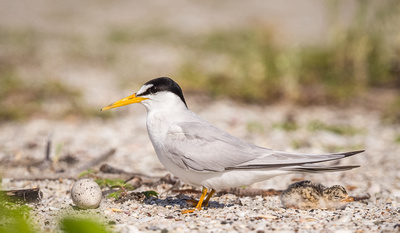 These elegant birds eat small fish, crustaceans, insects, small mollusks and marine worms, and feed their chicks until they fledge, about three weeks later. Both parents provide protection from sun and predators. If a diminutive tern dive-bombs you during a stroll on the beach, you are too close to a nest. Usually, least terns nest in colonies of ten to twenty pairs, although that varies by location. I have observed colonies of terns chase herons, plovers, ghost crabs and humans who wander too near their territory.

Although they belong to the same family, terns are sleeker than gulls and don’t scavenge for food. A tern’s narrow, long wings are suited for maneuvering and diving for prey, whereas gulls grab food but don’t generally dive.

Terns competing for minnow and mate

Sandy beaches—the kind that people like—provide prime nesting habitat, so as more coastal development occurs, populations of least terns have declined. The American Bird Conservancy lists the Least Tern (Sternula antillarum) as one of their 25 threatened birds that are a special focus for partnership, such as programs to protect beach nesting birds. In addition to habitat loss, least terns are threatened by beach recreation, oil spills, pollutants and rising sea levels. If suitable beach is unavailable, terns will nest on gravel rooftops.

Please respect protected areas and keep dogs away as well. Birds disturbed from their nests for ten minutes in the hot Florida sun can result in fried eggs, and untended chicks become easy pickings for gulls, crows, hawks, dogs and feral cats, in spite of the mobbing defense mounted by the parent birds. I use a long telephoto lens (1200mm) to ensure my presence doesn't disturb the birds.

A future for the least tern depends on us. We can help these protective parents by sharing the beach and giving them space to raise their families. 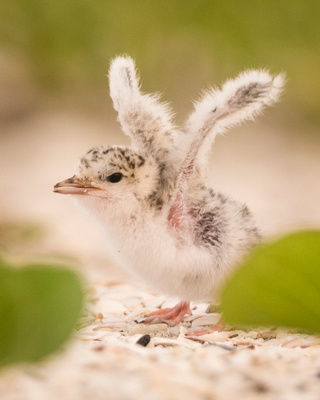