Did you know that not all birds nest in trees? This time of year, though, I watch where I step because the nests, eggs and chicks of shorebirds blend in with the sand. In our area, the Snowy Plover (pronounced like lover) and the Wilson’s Plover scrape small nests in the sand where hatch downy young that can barely be seen. The precocial chicks race and rest in the dunes and along the wrack line, feeding themselves small invertebrates such as insects, and crustaceans. Both parents follow, occasionally taking them under their wing to protect them from threats. Hearing the adults’ call, a sharp whistled “wheep”, warns me that chicks are near. Time to back away! One pair of Wilson’s Plovers that I photographed this season lost their eggs to a bobcat, but to my delight, they produced two more chicks. The flightless chicks are vulnerable to predators until they fledge at roughly 21 days. In contrast to the plovers, who are solitary nesters, two species of seabirds, the Least Tern and the Black Skimmer, nest in noisy, active colonies on the beach. Bird steward volunteers rope off sections of the beach to protect the camouflaged eggs and chicks from accidental trampling. Please respect protected areas and keep dogs away as well. Birds disturbed from their nests for ten minutes in the hot Florida sun can result in fried eggs and untended chicks become easy pickings for predators. However, gulls, crows, hawks, raccoons, coyotes, dogs and feral cats can snatch eggs and chicks, in spite of the mobbing defense mounted by the parent birds. I use a long telephoto lens (1200mm) to ensure my presence doesn't disturb the birds. The tiny Least Tern has a charming courting ritual, in which the male offers a minnow to a potential mate as he puffs his chest and dances around her. If she takes it, they bond and she typically lays three eggs in a shallow scrape of sand and shells. After three weeks or so, the chicks hatch. For their first three days, they stay near the nest, cuddled together in a tiny depression in the sand. Both parents provide protection and fish until the chicks are able to fly, about three weeks later. This diminutive bird is a fierce protector of its’ young. I’ve watched colonies dive-bomb herons and humans who wander too near. The Black Skimmer skims water with the lower part of its orange bill (mandible) submerged. When it touches a fish, the upper bill (maxilla) snaps shut. This seabird is twice as large as the Least Tern. 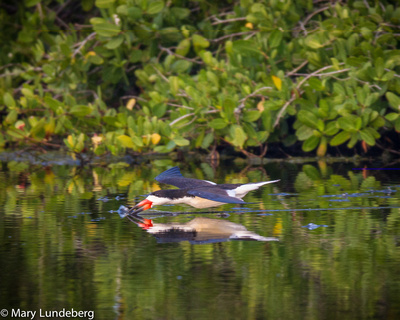 Defenseless chicks leave protected areas to explore their new world. Please teach children not to chase or feed shorebirds and seabirds, who need to rest or tend their fragile young. Populations of beach-nesting shorebirds and seabirds have declined in Florida, due primarily to habitat loss and human disturbance. We can share the beach and protect our beach-nesting birds. Consider becoming a bird steward; it’s rewarding!