The gopher tortoise, the Florida state tortoise, is one of the oldest living species, originating from a group of tortoises that lived here 60 million years ago. The gopher tortoise, Gopherus polyphemus, used to be well established but has declined 80% over the last hundred years, and is now listed as threatened. 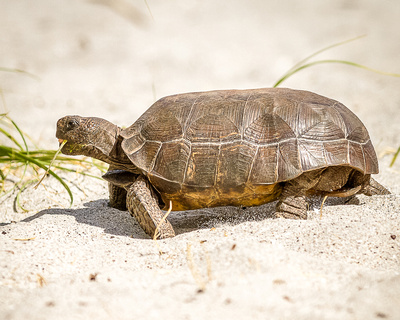 Their name derives from their ability to dig large burrows. The forelimbs of these reptiles are flat and shovel shaped, built for digging burrows in dry well-drained soil or sand. The burrow entrance is half-mooned shaped, like a tortoise. Burrows range from six to ten feet deep, 15-40 feet long and as wide as the tortoise is long. Burrows are essential to gopher tortoise survival, since they protect the tortoise from the sun, predators, and fires that naturally occur in dry, sandy uplands.

Because their burrows shelter about 360 other species of animals (such as burrowing owls, gopher frogs, quail, and snakes), the gopher tortoise is a "keystone species." Removing a keystone species can have a detrimental effect for ecosystems.

Even if a burrow doesn’t show obvious activity, that doesn’t mean it isn’t being used. According to Eric Sievers at the Florida Fish and Wildlife Conservation Commission, “Both the tortoise and its burrow are protected under state law. All burrows classified as potentially occupied are protected, and this includes burrows with obvious signs of use and those with minimal or no obvious sign of use…The lack of observable tortoise signs may be due to weather or season. “ If construction can’t avoid the burrow by 25 feet, a permit from the FWC is required. 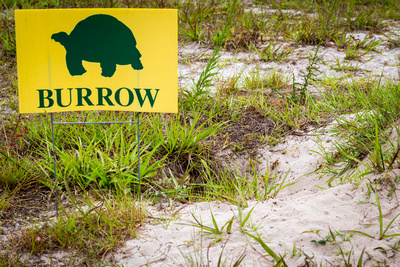 Loss of habitat is their biggest threat.

Prior to 2007, developers could pay mitigation to plug up burrows and entombed thousands of tortoises. Now builders purchase a permit to have a tortoise relocated according to FWC guidelines. Tortoises are released into temporary enclosures for six-twelve months and relocated into high quality habitat. Permits and other useful information is on the FWC website.

Results evaluating the success of relocation indicate that about half of the tortoises relocated dispersed or died their first year. If penned first, 69-92% survive.

Along with development come other threats to gopher tortoise survival, such as increased road mortality, use of pesticides and herbicides, disease from relocation and fire suppression.

Female gopher tortoises lay four to six eggs nests in the sand at the entrance of the burrow, and the eggs hatch about 3 months later. 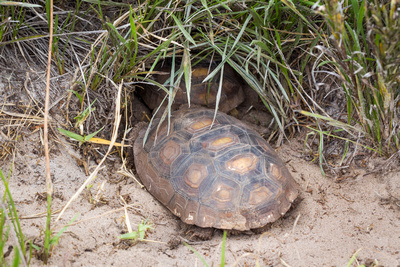 These slow moving vegetarians live 40-80 years. The plants they eat provide water. Please do not place gopher tortoises in water, or they might drown. If you see one crossing a road, move it in the direction it was traveling in. 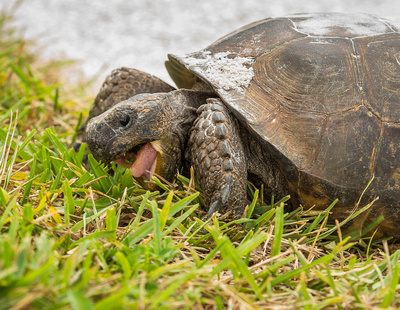 Will our native gopher tortoise survive the next 25 years if the population of Florida expands by 40% as predicted? Can we preserve enough habitats for gopher tortoises and the critters living in their burrows?