Will the Future be Rosy for Spoonbills? 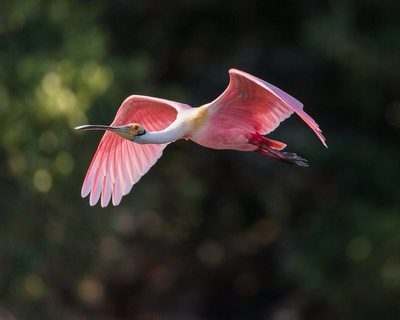 Some people confuse spoonbills with flamingos, since both birds are large and pink. These huge wading birds stand almost 3 feet tall with wingspans of 4 feet. In mating season, the striking wing feathers turn bright red to magenta, making spoonbills one of Florida’s most unique and brilliant birds. Biologists believe their pink feathers are derived from the spoonbill’s diet of carotenoid-rich organisms like shrimp. Some writers have advocated for the spoonbill to be our state bird, rather than the mockingbird.

The spoonbill’s distinctive spoon-shaped bill has a nerve that tingles when the it touches prey. To feed, the spoonbill sweeps its open bill from side to side in the water, which creates whirlpools of water. As prey escapes, the spoonbill feels vibrations and snaps its bill shut on aquatic insects and crustaceans, and tosses minnows back to eat them. Spoonbills need the right amount of water to forage. If it is too deep, their bill can’t reach the bottom, and if it is too shallow, the fish leave. 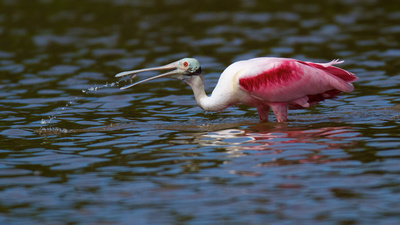 Spoonbills sift through a lot of mud, and parasites hop on them. They bathe and preen to clean their feathers. These beautiful birds inhabit wetlands, ponds, and estuaries within southern Florida, coastal Texas and southwestern Louisiana in the United States. 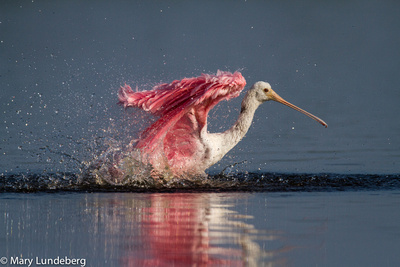 A Bowl of Roseate Spoonbills

Spoonbills are gregarious birds, feeding together, flying together and congregating in rookeries to raise their young. Spoonbills feed in groups with other wading birds, such as Ibises, herons and egrets.  Birds send warning signals when predators appear. The spoonbill’s ears on the side of her head usually stay above the water. Groups of spoonbills are called a bowl. 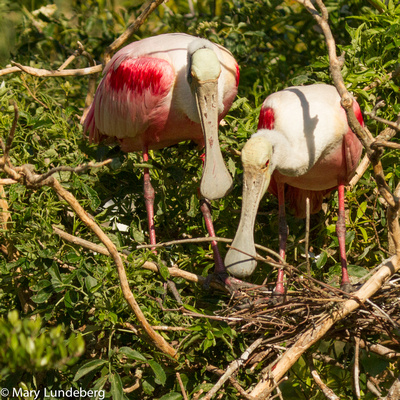 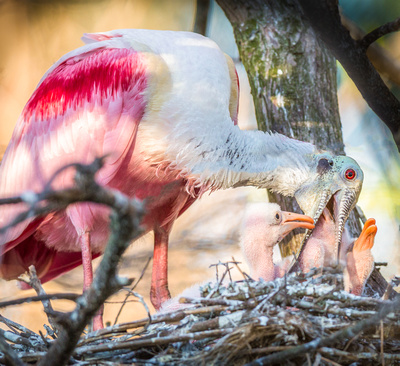 Spoonbills mate for the season, and although males are slightly larger than females, they look similar. Spoonbills engage in courtship, such as the mating dance I observed in the Everglades. 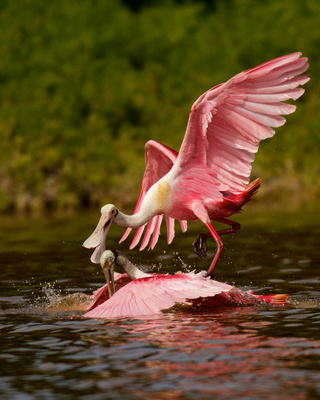 The male collects twigs, brings them to the nest (often in mangrove trees) and the female arranges them. Both parents incubate the eggs, and feed their young. The parents dribble regurgitated material into chicks’ open bills. After about three years, immature paler spoonbills become adults and their pink feathers darken. 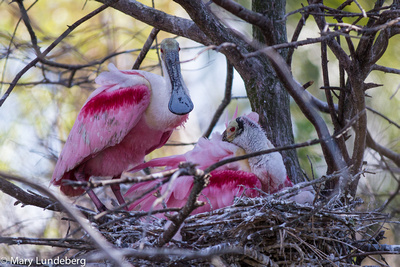 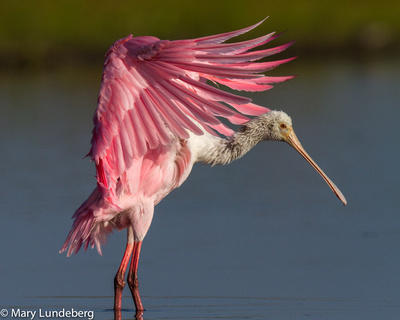 Spoonbills, prized for their flamboyant feathers, were slaughtered almost to extinction by plume hunters during the late 1800s. Once spoonbills gained legal protection, the species rebounded until the later 1970s when 80% of their wetland habitat in Florida Bay was drained for development. Nesting in the Tampa Bay area has increased however, on Audubon protected islands. Yet, spoonbills’ habitat remains threatened, so the FWC lists them as a species of special concern.

Spoonbills are sensitive to water fluctuations. During one nesting season in Florida Bay, an entire colony with nearly 400 chicks was decimated when water levels rose rapidly.

The Roseate Spoonbill has been identified as a key indicator species. Scientists are concerned because spoonbills are struggling in the everglades, and this indicates trouble for that ecosystem. Let’s listen to the spoonbill’s warning. 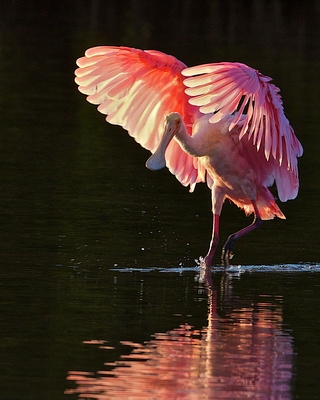