Fox in the Neighborhood

“There’s the coyote the golf course is trying to trap,” said my instructor. “That’s not a coyote, that’s a red fox,” I said as we watched a rusty creature emerge from the woods and gracefully sprint across the back of the driving range. “Look at his beautiful bushy tail, and his size.” I could barely see the white tip, so characteristic of red fox, but the stride and size was clearly fox, not coyote.  Although both belong to the same dog family Canidae, a red fox weighs up to 15 pounds, as compared to a coyote which can weigh up to 50 pounds. 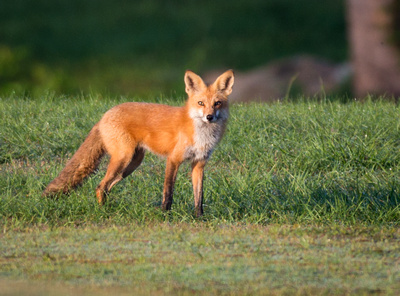 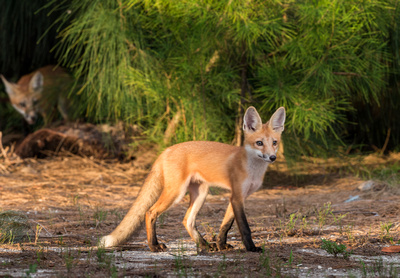 For the next three evenings I parked my car, and waited for the fox to reappear with my camera ready. I saw palm fronds the color of the fox, but no fox. Then a friend who knows I like wildlife told me she saw a family of fox on the golf course and described where she saw them.  I persuaded my husband to play golf with me the next evening. As we neared the hole where my friend spotted the fox family, I said to my husband, “I don’t see any fox.”

“What’s that?” He nodded to a catlike creature curled up, resting in the shade, partly hidden by a bush. Fox are masters of camouflage.  I climbed out of the cart slowly, took her photo and left quickly so as not to disturb her. For the next three months I photographed the fox family at dawn and dusk, whenever I could, observing the behaviors of the father fox (called a dog) and the mother fox (vixen) as they cared for their three kits. 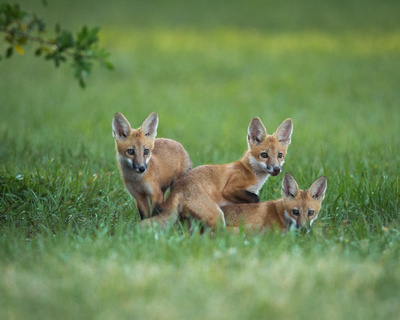 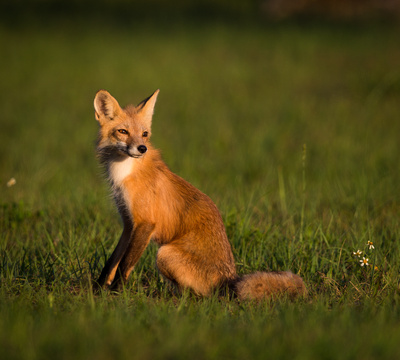 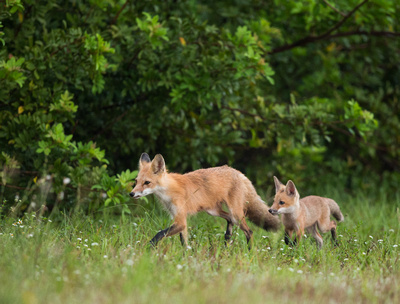 Predators on the Edge

Red fox like the edges of woods and hills for protection, Although fox can outrun coyotes, their kits can’t. Coyotes kill fox kits, so fox tend to den near people, since coyotes are more wary of people.  Unlike coyotes, fox do not kill dogs or cats.  Coyotes can hunt in packs, whereas fox are solitary hunters. Foxes are skillful scavengers and eat fruit, insects, frogs, birds’ eggs, rodents, small mammals (e.g squirrels) and even baby alligators. Because their ears are so large, they can hear rodents running through thick shrubs. Fox don’t overeat; they cache surplus food for future use, digging a shallow hole and covering it with dirt, twigs and leaves. I watched the vixen retrieve the remains of a dead bird she had saved. 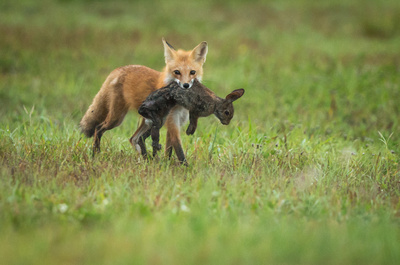 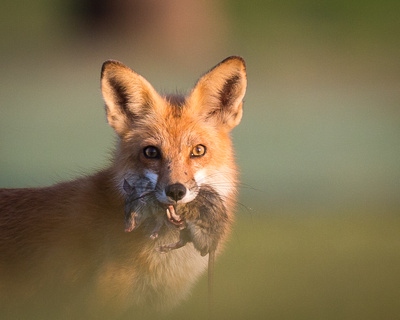 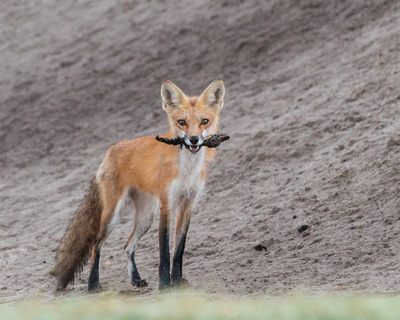 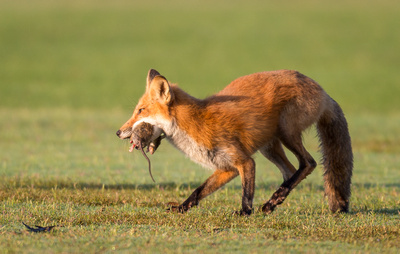 To catch their prey, fox have developed catlike behaviors. The anatomy of their eyes is similar-they have vertical-slit pupils that allow them to see in the dark as well as bright daylight. Fox move quietly and can quickly pounce on prey, even as young kits. 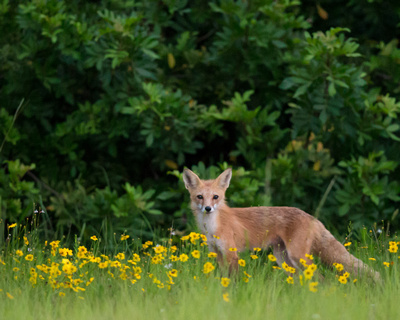 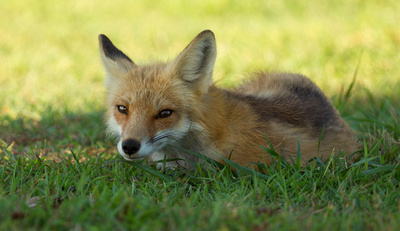 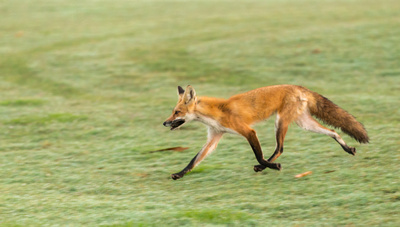 Fox are devoted parents, sharing in guarding the den, providing food and grooming their young. The female fox nursed her young, while the father fox stood guard.  As the kits grew, their territory expanded, and the fox changed dens, even adopting a sand trap as one of their homes. My favorite times were watching the kits play, chasing one another and pouncing on one another as they developed their amazing skills. 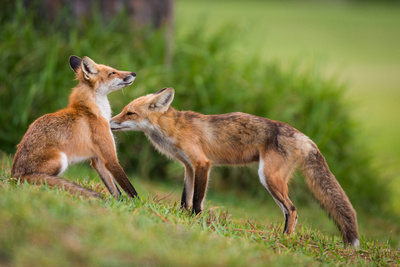 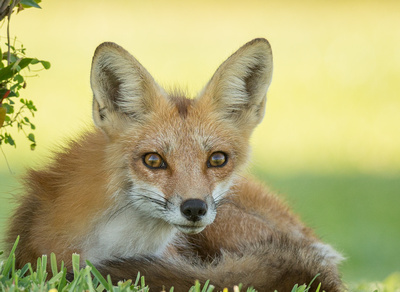 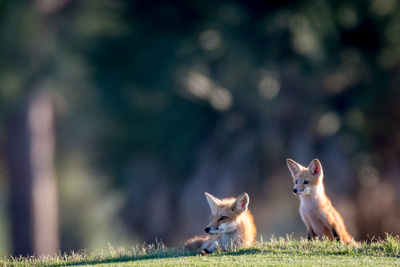 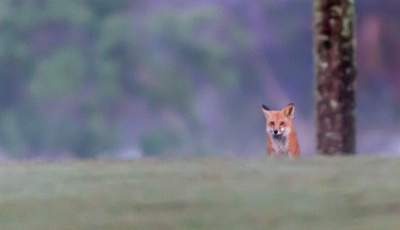 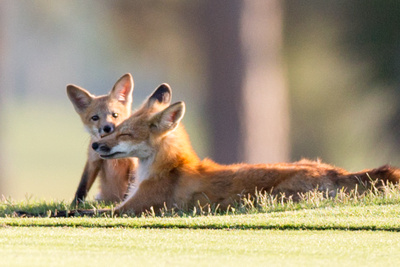 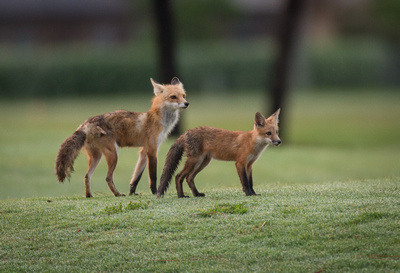 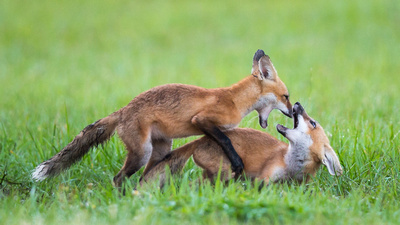 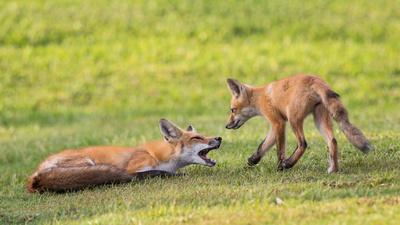 Vulpine success story: The red fox (Vulpes vulpes) has the widest geographic distribution of any carnivore alive in the world today. I am grateful for the opportunity to photograph this beautifully adaptable creature. I welcome the red fox in our Florida neighborhoods. 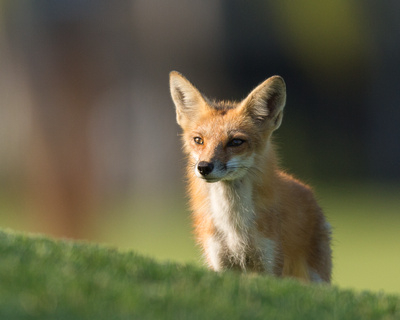 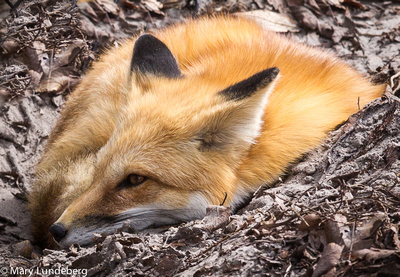 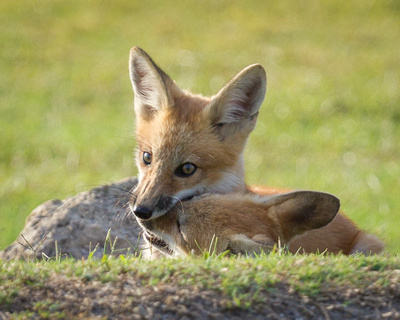 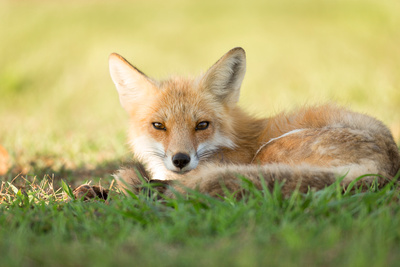 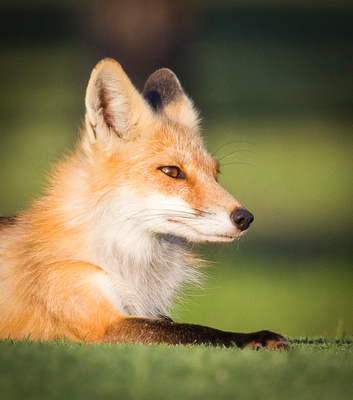 BonnieG(non-registered)
I enjoyed your photos. The fox is reclusive and I don"t get to see them often. While working in mail sorting on night shift I sometime witnessed the couples return to the den between 3 and 5am. With a loud scream like call one would give and wait and then in the distance a return scream like call.back and forth Until they bought met near the den with sniffing noses and a slight romp. Then complete silence as the disappeared to their. Den. Waukesha,WI.
No comments posted.
Loading...
Subscribe
RSS
Recent Posts
Good News for Green Turtles The Path of the Florida Panther The Buzz about Bees We are One: Polar Bears, Penguins and Plovers Skimmers Slice the Surf Least Terns: Protective Parents Seen and Heard Share the Beach with Birds Will the Future be Rosy for Spoonbills? Bunnies Are a Sign of Spring The Ancient Gentle Gopher Tortoise
Keywords
nature photography Florida wildlife Nature photography Tortoise Earth Pelican green turtles florida panther
Archive
January February March April May June July August September October November December
© Mary Lundeberg
Powered by ZENFOLIO User Agreement
Cancel
Continue