Rabbits appear everywhere this time of year: in stores, gardens, marshes and in the arms of children. Because of their fertility, bunnies are associated with spring and rebirth, hence their connection with Easter.

We have two species of rabbits in our area of Florida: the Eastern Cottontail, Sylvilagus floridanus, and the Florida Marsh Rabbit, Sylvilagus palustris paludicola. If you see a rabbit swimming, don’t worry, it’s a Marsh Rabbit.

Found close to water, this cousin to the cottontail is a strong swimmer. Its habitat includes fresh and brackish marshes, and its diet consists of aquatic and wetland plants. This reddish brown rabbit with a gray tail is slightly smaller than the cottontail, measuring about 17 inches long and weighing slightly more than two pounds. This crepuscular creature, active primarily at dawn and dusk, can hide in wetlands with just its’ nose showing above the water. 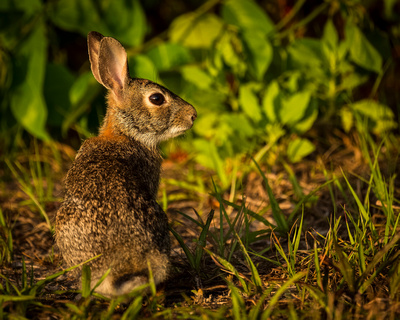 Distinguished by its white fluffy tail that looks like cotton, the Eastern Cottontail rabbit is found throughout Florida (except the Keys and coastal marshes). Ranging from 14-20 inches long, and weighing two-four pounds, this bunny prefers brush, weed patches and the edges of forests. Like the marsh rabbit, the cottontail is a herbivore, who likes clover. At dawn, I’ve noticed the rabbits in my garden trimming the Mexican Petunias I planted for the butterflies. 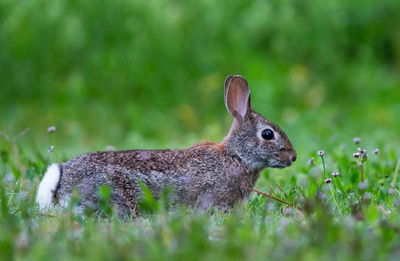 Rabbits breed fast and frequently, and are as prolific as the saying goes. Bucks (male rabbits) and does (female rabbits) reach sexual maturity before they are a year old. Unlike other mammals, does don’t have an estrous cycle, so they can breed anytime. Intercourse stimulates ovulation. After 30 days, does produce a litter of 4-12 kits, and can mate again after the kits are born. Young are typically born from March through September.

Rabbits’ eyes are placed high to the sides of their heads, allowing them to have nearly 360° panoramic vision, as well as above their head. They can see everything behind them and only have a small blind-spot in front of their nose, so they have evolved to detect predators from almost any direction. 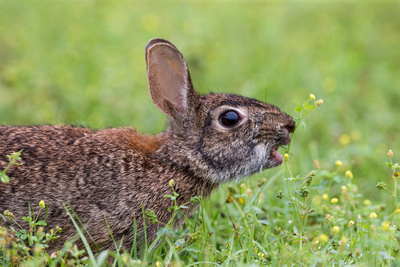 In addition to excellent eyesight, rabbits possess a keen sense of smell and hearing. When threatened, they will freeze in place, since predators such as cats, dogs and foxes are better at detecting moving prey. Rabbits can run up to 15 m.p.h., and usually do so in a zig zag pattern. Rabbits have over 40 predators, including dogs, cats, alligators, bobcats, foxes, eagles, hawks and owls. About 80% of bunnies die from predation, although some rabbits live 8-10 years in the wild. 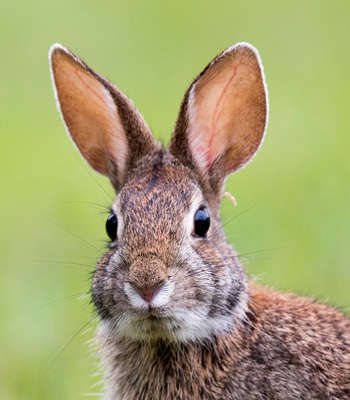 Rabbits are social creatures, hanging around and grooming one another. A group of rabbits is called a herd. Rabbits are revered in our culture, as evidence by their presence in children’s books and cartoons. These gentle herbivores symbolize abundance, sensitivity and vulnerability.