The brown pelican (Pelecanus occidentalis) glides gracefully along the eastern and western coasts of Florida, occasionally dipping the tip of one of its’ six to seven foot wings in water. A master of aerodynamics, the pelican’s wing beats are slow and powerful as it surfs updrafts along waves or buildings. When it spots fish, it turns, then dives headfirst from heights of 50 feet, folding its wings before it hits the water. Why does this creature plunge so fast and so hard? 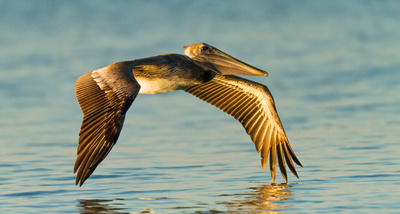 The pelican’s plunge-dive stuns small fish, which the pelican scoops into the gular pouch attached to its lower bill. This huge pouch expands to hold about three gallons of water. A pelican dips its head forward to drain the water from its bill and tips its head back to swallow the fish whole. Sometimes minnows leak out, which seagulls snatch. 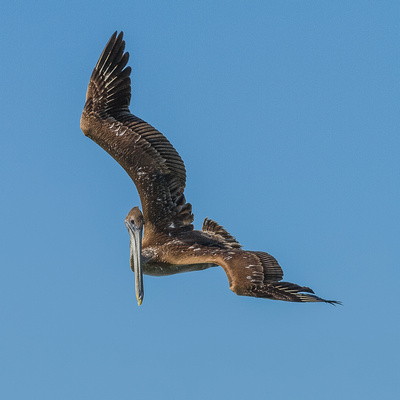 Brown pelicans’ bodies are designed for water impact. Air sacs under their skin (including the throat, breast and undersides of their wings) may cushion the impact of hitting the water. These sacs, along with air sacs in their bones, may also help them bob to the surface after the plunge. In spite of their large size, pelicans weigh only 6-10 pounds. 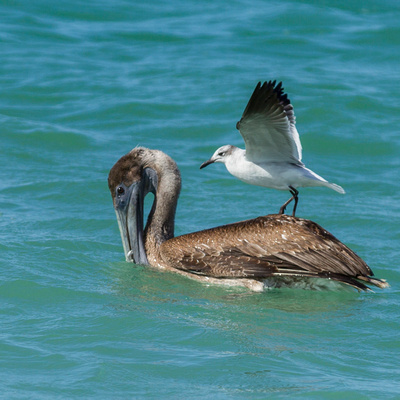 Entanglement in fishing gear may lead to a pelican’s slow death from dehydration and starvation. If you hook a pelican, never cut the line. ***For instructions on removing a hook, download this brochure: https://www.saveourseabirds.org/wpcontent/uploads/2014/07/pelican_brochure_version_5.pdf.

If the bird is injured or has swallowed the hook, call the Wildlife Center of Venice (941-484-9657), the Peace River Wildlife Center (941-637-3830), or Save our Seabirds (941-388-3010). Every year several hundred pelicans require rehabilitation from fishing injuries, and from ingesting large fish bones that puncture their pouch, throat or intestines.

Do not kill pelicans with kindness. When fishermen filet sheepshead or other large fish and toss the bones to begging pelicans, the bones can lodge in their throats, causing severe injuries.

Because pelicans are sensitive to disturbance from humans, they prefer to nest on isolated islands in large colonies, with both parents tending the chicks. Juvenile pelicans are brown with a white belly and after three years mature into grayish adults with yellow caps.

Destruction of habitat, overfishing and water pollution adversely affect pelicans. The Gulf oil spill may be responsible for hundreds of thousands of seabird losses. Brown pelicans are protected as a Species of Special Concern in Florida. Although once endangered, pelican populations recovered after dangerous insecticides (DDT) were banned.

Pelicans swim well with their webbed feet that also serve as brakes for landing. This webbing connects all four of their toes, even the back one. I love to watch pelicans take off, as they pound the surface of the water with both feet to gain speed. But mostly, I enjoy seeing pelicans roost on a mangrove branch or a post, which allows them to rest and preen their feathers. This sight reminds me to pause and take pleasure in our spectacular surroundings. 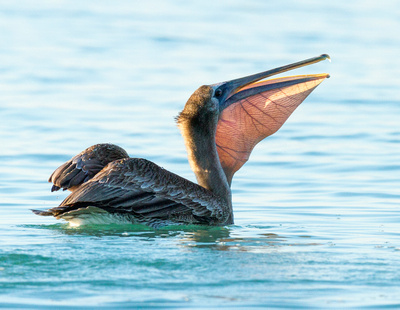