This is turtle time. The time when sea turtles lay clutches of 80-120 eggs, and hatchlings are born. As a member of Coastal Wildlife Club Turtle Patrol, I’ve been trained to identify turtle tracks and to look for hatchling tracks. Three days after a nest hatches, we excavate the nest to count the hatched and unhatched eggs, and sometimes find live hatchlings. 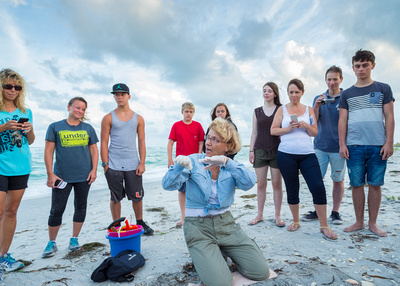 Yesterday, we found three hatchlings deep in the nest, deeper than the typical 18 inches beneath the sand. Somehow these three missed the initial burst of 100 sea turtles cracking their shells, and erupting upward through the sand towards open lighter horizon. The light was the moon reflected on the water, and turtles use this to navigate. All turtle tracks led to shore. If houses, flashlights, or street lamps are on, turtles sometimes go towards artificial light and become disoriented, which can lead to death. If holes and castles are left in the sand, hatchlings can fall in and die. Beach chairs, debris and umbrellas can become barriers to hatchlings as well as sea turtles. 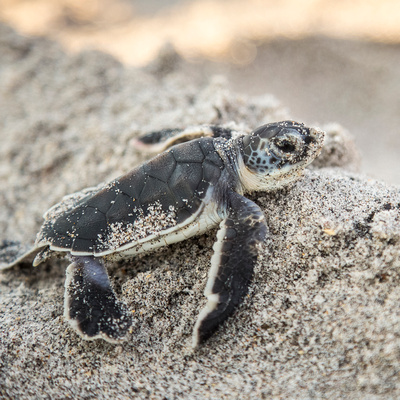 Loggerhead sea turtles represent our most common nesting sea turtle, and Florida shores support over 90% of the U.S. population of loggerheads (Caretta caretta). Although sea turtles have lived over 110 million years, their survival is threatened. Boat propeller gashes are apparent in many dead and injured sea turtles that wash up on local beaches. After migrating hundreds of miles, and laying hundreds of eggs, female turtles remain offshore, making an average of four nests every two weeks or so. Hatchlings emerge after 45-60 days, mostly at night.

It is estimated that only 1 in a 1,000 hatchlings will survive to maturity, and return as adults to nest, usually on or near the beach where they hatched. From the nest to the shore loggerheads face threats from erosion, ghost crabs, armadillos, raccoons, coyotes and gulls. Hatchlings must swim many miles until they reach floating seaweed called Sargassum, without getting snatched by a frigate bird, swallowed by a shark, poisoned by debris, or thrown by a storm. About 85% of little loggerheads found after storms have ingested bits of plastic. Along the way, these tiny turtles will sleep on the surface of the water, folding their front flippers over their backs. Oil spills can be deadly for baby sea turtles.

In addition to loggerheads, the endangered green turtle (Chelonia mydas) also nests nocturnally in our region. Finally, Kemp’s ridley turtles (Lepidochelys kempii), though rare, nest in the daytime. Most sea turtles nest at night, and are sensitive to disturbance from humans or other animals. If disturbed, the sea turtle will turn around without laying her eggs, making a “false crawl” in sea turtle lingo. Nesting has increased this year among all three species of sea turtles. 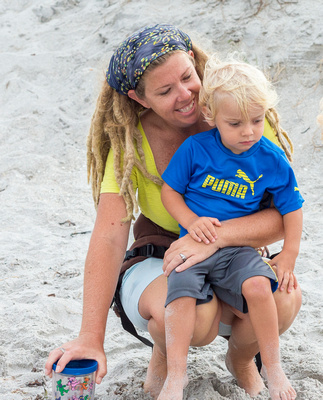 If you walk the beach at dawn, you may get the chance to guard a hatchling from the gulls as it crawls to the sea. One visitor declared, “This was the best part of our vacation.” 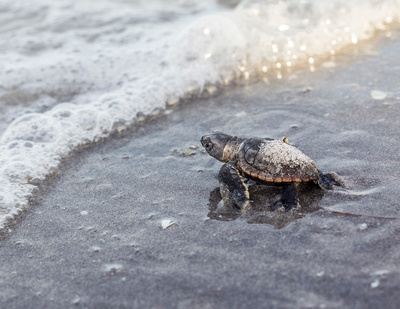