Call of the wild Sandhill Crane

Sandhill Cranes are my husband’s favorite birds. He loves their large size, their wild wondrous call and their elegant mating dance. With their long legs and necks, these gray birds with crimson-capped heads stand up to 4 feet tall, and have a large wingspan ranging from 5.5 – 7.5 feet. Males are slightly larger than females, but otherwise look identical.

I often hear their loud, trumpeting call before I spot these prehistoric creatures, because their call from the ground or the air can be heard 2.5 miles away. The structure of Sandhill Cranes’ elongated windpipes enables them to produce their distinctive bugling sound. I especially love the synchronized duets that occur when mated cranes stand close together. During this “unison calling”, the female makes two calls for every one from the male. The cranes’ courtship dance is delightful. They stretch their wings, bow and leap gracefully into the air, chasing one another energetically. 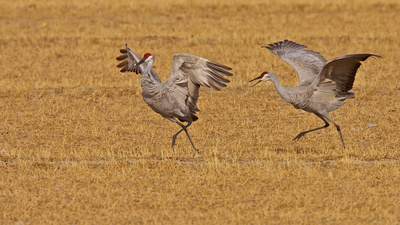 Sandhill Cranes mate for life and share parenting duties. Both bring plant materials to construct a nest, usually in a marsh, bog or shallow pond. The female lays 1-3 eggs, and both male and female cranes incubate the eggs for about 30 days, taking turns sitting on the nest. Both parents protect the young once the chicks hatch. 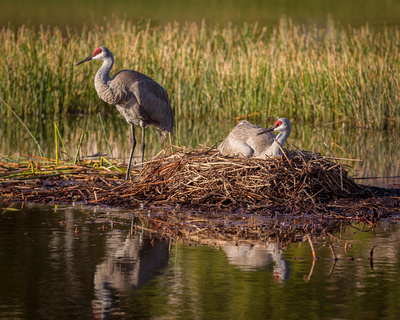 Foxes, raccoons, coyotes, bobcats and alligators hunt the chicks, as well as hawks, eagles and great horned owls. Young chicks hide under their parent’s wings, but usually only one survives. In addition to natural predators, cars hit chicks who haven’t fledged yet. 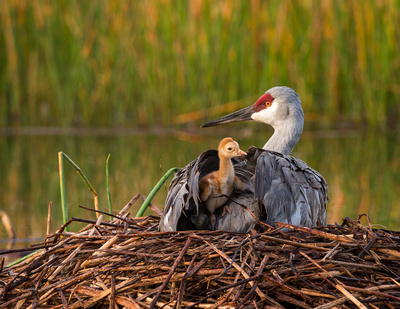 Young Sandhill Cranes are precocial: able to swim and leave the nest within a day after hatching. Both parents feed seeds, insects, berries, frogs, crayfish, grubs and roots to their chicks who remain with their parents for about ten months. Cranes can be observed in fields, prairies, wetlands as well as urban places such as golf courses. 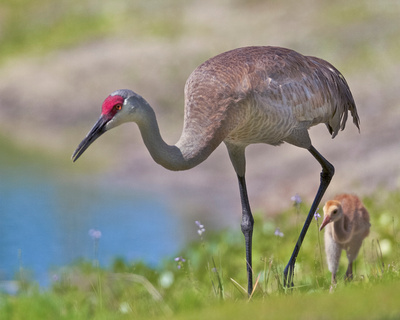 Hopefully, these magnificent birds will continue to grace our ponds and skies with their melodies. You may enjoy the migratory Greater Sandhill Cranes, as well as our non-migratory resident species, who share space when their “snowbird” cousins arrive each fall. Cranes can live up to 20 years. The oldest Sandhill Crane fossil, estimated to be 2.5 million years old, was discovered in Florida. Will they survive another million years? 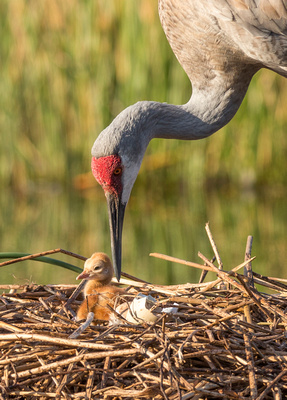 Marsha Cole(non-registered)
I am an amateur artist and would love to use one of your crane and chick photos as reference for my own use and for sharing with an international group of similar folks who are interested in natural history illustration. I am not looking for any commercial re-use. Were I to have your permission to use one of these photos (either the one with the colt on its mother's back or the one with the mother bending down over the colt) I would certainly credit you and send all who view it to your site, which is fabulous, by the way. I am a big fan also of the work on Gopher Turtles. Many thanks for your consideration.
No comments posted.
Loading...
Subscribe
RSS
Recent Posts
Good News for Green Turtles The Path of the Florida Panther The Buzz about Bees We are One: Polar Bears, Penguins and Plovers Skimmers Slice the Surf Least Terns: Protective Parents Seen and Heard Share the Beach with Birds Will the Future be Rosy for Spoonbills? Bunnies Are a Sign of Spring The Ancient Gentle Gopher Tortoise
Keywords
nature photography Florida wildlife Nature photography Tortoise Earth Pelican green turtles florida panther
Archive
January February March April May June July August September October November December
© Mary Lundeberg
Powered by ZENFOLIO User Agreement
Cancel
Continue